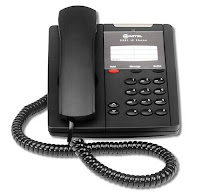 Previously we've been able to just change the MAC address on the 3300 controller when we swapped out faulty phones, but had some problems with that recently. The phones were appearing on DHCP and in the unprogrammed IP phones list (see under Maintenance > IP Telephone Inventory) but weren't actually picking up the extension number.

The phones start up normally, light flashing for a minute or so before going out for a couple of seconds and then re-appearing solid. Turns out the solid light indicates its in registration mode.

Make sure the previous MAC address of the old phone is cleared from extension number (Users and Devices > Advanced > IP telephones > Single line) and that it doesn't reappear after a few seconds (that would indicate the old phone is still online). Then on the phone you have to type the registration sequence NNNXXXX followed by the Hold key. NNN is the Registration Access Code (System Properties > System Feature Settings > System options) and XXXX is the extension number.

If succesful the light should go out and you get a dialtone. If it fails you'll see the light blink quickly and stay on solid.

I did notice the previous Registration Access Code was ### not sure whether that's what it actually was or if that means its masked. There's also a Replacement Access Code which I guess might get you around having to delete the MAC address of the previous phone.