Draytek 2820 not connecting to Vigor 120 ADSL modem on WAN2, no response from server

Got a DrayTek Vigor 2820 router on the latest 3.3.7.5 firmware. We've got Plusnet connected using the ADSL WAN 1 port, which works fine. However WAN2 was connected to a Technicolor TG582n in ethernet bridged mode to ZEN broadband. WAN2 started dropping randomly and we couldn't pin down why.

We swapped a Draytek Vigor 120 ADSL modem (3.2.6.1) in place of the Technicolor. Line sync was ok, in fact faster than the TG582n, esp the uplink which doubled up from 512k to 1Mbps. Bonus! However it wouldn't connect from the 2820 router using the WAN2 PPPoE setup. This is a PPPoE to PPPoA bridged mode.

On the Online Status > Physical Connection you could see the PPP connection starting, but followed by a 'No response from the server' error.

Took a little while to identify - make sure the Vigor 120 modem has DHCP enabled on the LAN screen. Doh!

Posted by redleg at Thursday, February 19, 2015 No comments: 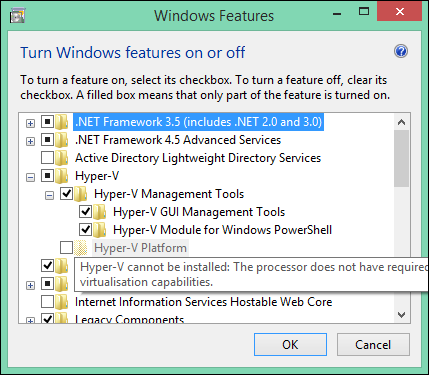 I was having a bit of trouble tracking down if there was a suitable CPU upgrade for an old Core 2 E7300 that would support Hyper-V on Windows 8.1. The option to enable it in Programs and Features was greyed out. You an see the message here "Hyper-V cannot be installed: The processor does not have required virtualisation capabilities."

Turns out the CPU needs to support SLAT - Intel call their version, Extended Page Tables (EPT). Its not enough having Intel VT or VT-x or VT-d, it needs to be 'VT-x with EPT'.

Roughly speaking, you need an i3, i5, i7 or equivalent Xeon CPU for EPT support. None of the Core 2 CPUs had it present.

For a more definitive answer, you can bring up a full list of supported CPUs with this search of Intel's ARK library http://ark.intel.com/search/advanced?s=t&ExtendedPageTables=true

Posted by redleg at Wednesday, February 11, 2015 No comments:

I wanted an SBS 2008 server (which is essentially Windows Server 2008) to email me if there was a login failure recorded. So if someone types the wrong password, or more importantly, starts trying to guess a password, I'll get a notification.

The Event Viewer should let you attach a task to a particular event id, in this case Audit Failure Event ID 4625. Find one in the event viewer (using Filter Current Log > keywords > Audit Failure) then right-click and Attach Task.

Except no matter how many combinations of user/SYSTEM account, Run whether user is logged in or not, highest privileges and then messing with the from field and the smtp server (including a second receive connector on a different port), localhost vs ip vs 127.0.0.1 ... it just wouldn't send an email. I couldn't even see in the Transport Roles verbose logging what was happening. The only hint was in the Task properties under history which showed error 2147746321. That didn't Google to anything that fixed the problem.

So I gave up on that plan.

And decided to attach a script instead, dead simple, ran first time. So open notepad and paste this script in

Save the file as "security-warning.vbs" into somewhere handy like c:\users\administrator and change the task action from send email to run a program, point it at that script.

Note that the sending port is the default 25 in this example which doesn't allow internal smtp by default. You might want to create another Receive Connector in Exchange Management Console > Server Config > Hub Transport using another port, eg 25025 and allow anonymous internal email via that instead.

Posted by redleg at Thursday, February 05, 2015 No comments: