When sending an email copy of an invoice or statement or purchase order from Sage 50 Accounts v22 (2016), the customer wanted the email to be held in Outlook before dispatch. That allowed an extra check and for them to be certain it was transmitted. 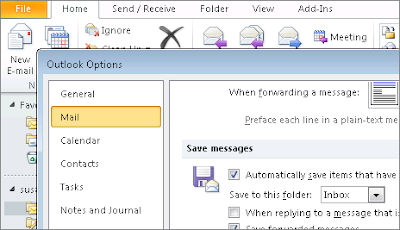 In Sage, under Settings > Email Defaults, you can specify for each type of attachment (Invoice or Sales order or Statement or Purchase Order or Remittance) whether the Sending Option should Save to Mailbox or Send Immediately.

They also wanted the email to be held in the Inbox of the Outlook 2010 client, not in the Drafts folder. This is an Outlook setting, not a Sage one. Look under Outlook > File > Options > Mail > Save messages > Save to this folder: Inbox
Posted by redleg at Saturday, October 01, 2016 No comments:

A Dell Vostro 3300 laptop failed to upgrade to Windows 10 on several different attempts. Interestingly after fitting a new hard drive and performing a clean install of Windows 10, it completed without issue - suggesting that there was a driver issue with the existing Windows 7 configuration. 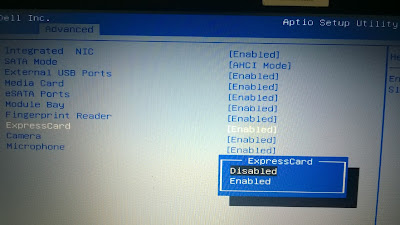 After much troubleshooting, we pinpointed the issue to the ExpressCard port. Simply disabling this in BIOS and then re-running the Win 10 upgrade, completed the upgrade without issue.

To disable, keep tapping F2 at startup when the Dell logo is on the screen. Move right into the Advanced Menu, then the Configuration options. You should see ExpressCard most of the way down the list. Press Enter, choose Disabled, then Enter and use Esc to quit, saving changes.

Not the usual IT support problem - TomTom Home (v2.9) wouldn't connect to the shop using Windows 10, so I couldn't actually pay for the maps upgrade. This is for a Mazda NB1 satnav fitted to a Mazda CX-5. That started me looking at alternatives. The same version on Windows 7 was ok, connecting to the shop and quoting £59.95 for 12mo updates (ouch!)

I tried looking at the TomTom website to directly purchase maps. There was a Western Europe map for £44.95 on offer. Part way down the screen it says type the first two letters for your TomTom model - thats DP in the case of the Mazda NB1 - however its not compatible. Sigh!

In the end, I worked out that you need the full European map for this model. This was listed at £59.95 (reduced from £69.95) plus there was an offer for 18 months of updates, instead of 12mo. I looked on vouchercodes and there was also a new customer code of WELCOME15_UK giving another £8 discount.

Then click on Update My device and the new European map will appear on the list to download to the memory card. One last issue, its too big to fit, so I ended up selecting EU Zone 8 which seemed to include UK, France, Spain and Germany (that's this summer's road trip covered).

So £52 for full European map with 18mo updates seems a much better deal than the one offered on the automatic download via TomTom Home. Sounds like there are 30% codes available too, depending upon the time of the year.
Posted by redleg at Monday, August 08, 2016 No comments: 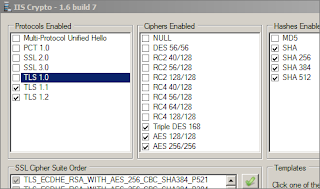 Event Viewer indicates that this is an SSL related error. So, we realised that TLS 1.0 had recently been disabled on this PC in line with PCI recommendations. We use the excellent IISCrypto utility to achieve this quickly and simply. Reinstating TLS 1.0 (no reboot required) allowed the SQLEXPRESS service to start up again.
Posted by redleg at Saturday, July 09, 2016 No comments: 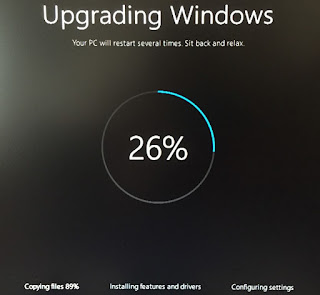 We're seeing a few interesting Windows 10 upgrade issues as everyone takes advantage of the free update before the end of July. We've got a pretty packed schedule updating businesses before the deadline. Its definitely worth doing, especially from a performance and security point of view.

Just had a Dell Vostro 3550 which was on Windows 7 Pro. Initial stages of the update progressed normally but then we got a completely blank screen (that model uses the Intel HD 3000 graphics adapter). We could see a lot of hard disk activity but no messages - it stayed like this for over 30 minutes.

We didn't want to cancel the install and have to revert, then start again - possibly with  complicated restore issues. However we spotted on an external monitor connected via VGA that the mouse pointer was still visible.

We then found that pressing Ctrl-Alt-Del brought up a menu and Task Manager would show processes, but 0% CPU. You could just see a 'Preparing Security Options' message flash up in the background as the menu appeared.

In the end we had to do a reboot from that menu. There was no uninstall fortunately, the laptop rebooted normally but still no display on the laptop monitor. However we did get a desktop on the external monitor. Windows 10 had completed but was suffering repeated file explorer  crashes and restarts.

► The fix to get the laptop monitor working was to upgrade the BIOS from A10 to version A12 (use an external monitor).

► The fix to stop Explorer crashing was to uninstall the IDT audio software.

We couldn't actually get to the Control Panel because it crashed every time the mouse moved over. Top tip - in the Cortana search box (or in the Run box - press Win-R) type APPWIZ.CPL to go straight to Programs & Features.
Posted by redleg at Wednesday, June 29, 2016 No comments:

Office Accounting 2009 - how to delete a saved report 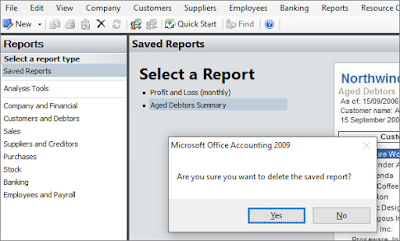 Not obvious this one, so needs documenting really. In Microsoft Office Accounting 2009 you can modify a report, so typically change the dates or columns or how the nominals or companies are summarised. Its pretty flexible and very easy to do.

At that point you might save the report. These customised reports are in the Reports > Saved Reports menu. We found after a while we ended up with a few along the lines of Aged Debtors Summary 1, Profit and Loss 1, etc

However its not obvious how to get rid of the old ones. There's no option within the report. No right-click menu. No delete button on the reports list adn nothing in the Actions or Reports menus.

All you have to do is go into the Saved Reports view, click once to highlight a report, then press Del on the keyboard. You'll get a prompt to confirm. Easy. when you know how.
Posted by redleg at Tuesday, May 17, 2016 No comments:

The most popular blog entry out of the 100+ on here, is the one about getting the Dell 725 inkjet printer to work with Windows 8 64-bit. That was exactly two years ago. We've just updated the same computer to Windows 10, which went very smoothly.

But guess what, it failed to load the printer, errors and crashes all over the place. Print Spooler keeps stopping, Print Preferences stops responding. Just had a session trying to iron out the problem, reload the drivers, trying 64 bit and 32 bit (the latter was Dells recommendation), set compatibility, try on another Win10 PC which hasn't used the Dell software previously, manually delete all the DLC* drivers per the previous article, etc.

But no luck, I think this 10yr old printer has finally met its match.

Be interested to hear if anyone succeeds, but I don't think its ever going to run on Windows 10 - time to buy a new printer.
Posted by redleg at Friday, April 29, 2016 No comments:

I run an IT Services company providing IT Support in Preston, Lancashire. We recently had an incident where someone opened a fake invoice attachment in Word, then managed to enable macros and run some very suspicious code that triggered the Locky cryptovirus.

You might take the view that it'll never happen to you. But these emails are looking more authentic every week. Its only a matter of time until someone in your business triggers one. Read the story of How to fix a cryptovirus like Locky, Cryptolocker, Torrentlocker for more details of what happened and just how quickly it took hold.

The key to multiple backups is a full easy to access onsite backup, as well as an online backup stored in a datacentre. That needs to be offsite to protect from fire, flood and theft - and in some cases cryptovirus too.Use a backup that offers a history or file versioning.

Be aware that a file sync service such as Dropbox or Onedrive isn't necessarily a useful backup - whatever damage or deletion or amendment or encryption happens to your file, will by synced immediately to the datacentre and then to your other devices. This will happen before you've had time to react.
Posted by redleg at Wednesday, March 02, 2016 No comments:

Normally on a Draytek (such as 2830, 2850, 2860 etc) you go into System Maintenance > Management and untick the 'Disable PING from the Internet' box. On the 2760 series that check box doesn't exist. Its still the same menu option, so: 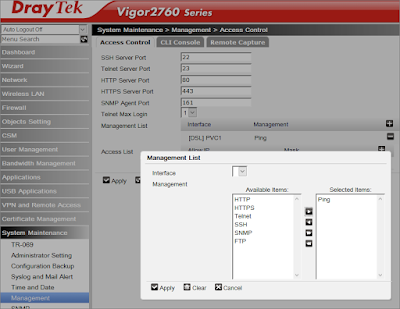 System Maintenance > Management
then for Management List you have to click the + symbol
and move the 'Ping' item from Available to Selected,
for your specific Internet interface (in this case the DSL PVC1)

Simple when you know where to look for it, see diagram.

Note that its worth leaving this off unless you're using it for testing or maybe uptime monitoring.

The other interesting point about the different models of the 2760 is that the older firmware model supports remote dial-in VPN users, whereas the newer v3 doesn't (I think it has LAN-LAN VPN iirc).
Posted by redleg at Wednesday, February 03, 2016 No comments: