We've just had a Windows 8.1 Lenovo laptop that stopped booting. It reported attempting Automatic Repair and kept failing and rebooting through the same cycle.

The advanced options after that has failed also gave you you a startup repair option. That wasn't able to fix the fault either. 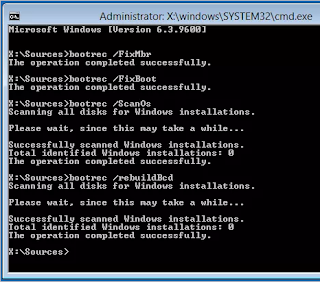 The usual fix under those circumstances is to go into advanced options, choose command prompt, then load Diskpart. From there you can fix the drive letter order if its got changed, remove unnecesary drive letters. Then fix the boot table using the bootrec command - often a chkdsk followed by deleting/renaming the existing Boot folder, then running bootrec /fixmbr, then bootrec /fixboot, and bootrec /rebuildbcd, will do the job.

In the end the fix was from the command prompt option, but we had to go into C:\Windows\System32\Config and rename the registry files (Default, Sam, Security, Software, System), eg. default.bak. Then copy the replacement files from the Regback subfolder where there is a recent backup.

The laptop rebooted with no bootrec tweaking needed.


NOTE - Looks like since Windows 10 version 1803, Microsoft are no longer creating a backup in Regback. You can still recover registry files from a Shadow Copy. See this article for details https://theitbros.com/restore-windows-10-registry-from-backup-or-restore-point/
Posted by redleg at Tuesday, March 19, 2019