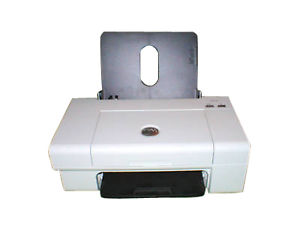 Just upgraded a Dell Vostro laptop to Windows 8.1 and the Dell 725 inkjet printer stopped working. At first there were no errors, nothing appeared to happen, no jobs appeared in the print queue. Then it turned into a communications error and a recommendation to enable bidirectional communications - which was already set. Just check that you're on the correct USB port (Printer > Properties > Ports), it appeared incorrectly as COM1 at one point. The correct USB port did show the printer greyed out when disconnected or turned off and then coloured in when online - but still wouldn't print.

I had a lot of trouble tracking down the correct driver. Dell's support website no longer lists Win 7 64-bit for that printer model. However if you look at their full Dell 725 ftp listing, it does show a download ... its just doesn't work with all the spaces in the link. Manually downloading R146546.exe based on that link turns out to be the Japanese version - sigh!

Once run, that should unzip to the c:\dell\drivers\R146546 directory and open a window listing the files. Right-click on setup.exe, click Properties > Compatibility and set to Windows Vista and Run As Admin. Now run the setup and it should proceed normally.

Only problem I came across was one PC where there were still some earlier drivers installed, causing a conflict with this version. Remove the Dell 725 printer from the Devices and Printers Control Panel. You also need to go into Print Server properties too, into Drivers. Click the Change Driver Settings to get admin access. Then remove the Dell 725 driver and package. Look in Control Panel > Programs and uninstall Dell 725 printer. Reboot and look in C:\Windows. Do a search for files starting DLC* and delete the ones you can. That should clear all the old stuff ok, follow the above instructions to install the correct driver. Good luck!
Posted by redleg at Tuesday, April 08, 2014