Been a big fan of ThinkPad T series for quite a while. Not the latest greatest tech out there but rock solid, excellent build and just does what is says on the tin. There are some nice features like ThinkLight, IBM nipple and useful software like Access Connections and Software Update - makes tech support life easy, plus they can take a hammering on the road day in day out. 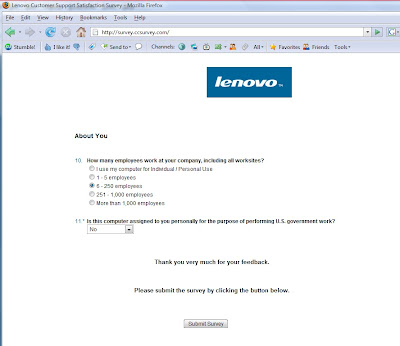 Just coming to end of life with a T42, had a T23 previously and one prior to that too. Got several clients with T20's, T30, T42, T43, T60. One of those ThinkPad T43 laptops recently started failing to boot at the start logo. After a session swapping memory, drives, power, batteries and trying to fix MBR I concluded there was a system board issue ... two weeks before end of warranty, good timing. No problem getting it fixed, probably took around a week and they didn't do a hard disk recovery which kept my life simple - yeah of course we had a backup.

To the point, I've just had a Lenovo Customer Support Satisfaction survey email which I duly completed right up to the last screen ...

Yes just discreetly dropped in at the end there is the question 'Is this computer assigned to you personally for the purpose of performing US government work?' ... oh and its mandatory. So are they just looking after probably one of their biggest customers ... or is it entirely coincidental that they want to identify US government work immediately after having a copy of the hard disk at their disposal. This being Blogger I'd have to go with the conspiracy every time :-)
Posted by redleg at Monday, March 31, 2008

And furthermore ... the thank you page just after stated 'Copyright © 1997-108 Satmetrix Systems, Inc. All rights reserved.'

Was that a jump back or jump forward in time - must have been with the clock change last weekend.